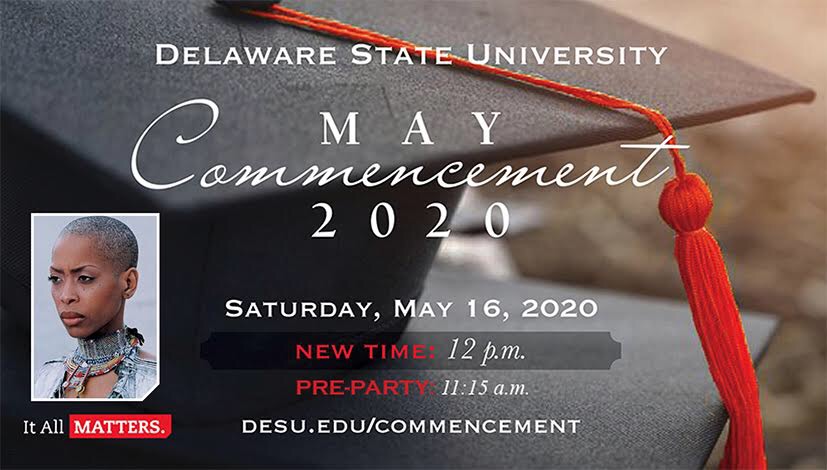 Dover, DE – Twenty-five cultural influencers from around the nation—including Hip Hop artists and the Former Vice President of the United States — will appear to congratulate Delaware State University’s Class of 2020 in its May 16 virtual Commencement celebration. The University announced on March 14 that students would receive their degrees in an online ceremony due to the COVID-19 pandemic, and detailed planning began immediately. A team of faculty, staff, students, and friends of the University envisioned a non-traditional ceremony utilizing all available social media platforms to reach graduates and their families around the world.

A few of the notable guests will include:

47th Vice President of the United States of America

“We knew better than to try to copy the traditional ceremony at Alumni Field,” said Dr. Francine Edwards, who is co-chairing the planning committee. “So we set out to create a memorable and surprising experience that the Class of 2020 will treasure forever as their own unique celebration.” The University leaned on many Alumni in the planning. Nicole Dye-Anderson, class of 2003 and an Executive with Barclays Bank, was particularly helpful in securing a number of the featured guests, “DelState gave so much to me. Whatever I can do to show my appreciation will be done. I am proud to work for a company that knows the value of HBCUs and gives me the freedom to help showcase them around the world.”

Graduating Senior and Student Government President Usman Tijani, whose mother has been diagnosed with COVID-19, agreed, “In an instant, I went from graduating Senior trying to complete everything to get to the finish line, to head of household trying to take care of my son, little brother, and mother. As a Hornet for life, I’m looking forward to this year’s commencement and, more importantly, what happens

In April, the University started the COVID-19 Student Emergency Relief Fund to support students like Usman, many of whom had to complete Spring 2020 coursework in situations threatened by lack of technology, health concerns, and even food insecurity. The University has raised $450,000 toward its $1 million goal. Over 1,200 students who have applied for assistance. In addition to many community

members and friends, the Delaware State University Alumni Association, The Laffey McHugh Foundation, Bank of America, Strada, The Links of Wilmington, M&T Bank, and the Rossi, Struthers and Cummings families have been critical supporters of the fund.

Dover Native and Philadelphia Television news anchor Ukee Washington will deliver the keynote remarks. Ukee was named to the Pennsylvania Broadcasters Hall of Fame in 2015 and is the son of the late Dr. Ulysses S. Washington, former Dean of the University’s College of Agriculture. Dr. Washington taught and lived on campus for 50 years.

In addition to celebrating nearly 700 graduates of the largest class ever, the University also graduates its first cohort of Dreamers — children of undocumented workers under the DACA program. Recipients of full scholarships awarded by TheDream.US, more Dreamers, choose to attend Delaware State University than any other University in the country. During the ceremony, Mr. Donald Graham, founder of TheDream.US and former publisher of the Washington Post, will have an honorary degree conferred in recognition of his humanitarian efforts.

Reflecting on the commencement celebration in these unprecedented times, University President Tony Allen said, “I hope this moment has taught us all is that whether you are a painter or a pathologist, a teacher or first responder, a student or a farmworker, the true health of our nation — physically, economically, socially and spiritually — depends on our ability to really be PRESENT, one to another.

When I confer degrees on the Class of 2020, it is more than a credential that will get them to their next goal. It is a reminder that each of them is now and always ever-present with us.”

The University’s Commencement will be followed by another virtual event sponsored by the Thurgood Marshall College Fund (TMCF), which will combine 75 HBCUs for a joint commencement ceremony. TMCF CEO and former Delaware State University President Harry Williams noted, “We are excited that graduates from our member-schools will receive the public recognition that they earned and deserve.

This celebratory event is an effort to lift-up all HBCU students and to let them know that we are proud of their hard work and perseverance, especially during these difficult times.” The event will be broadcast on the ESSENCE Studios platform. The Thurgood Marshall College Fund member schools serve nearly 300,000 college students.