The Impact Of The HBCU Dance Culture 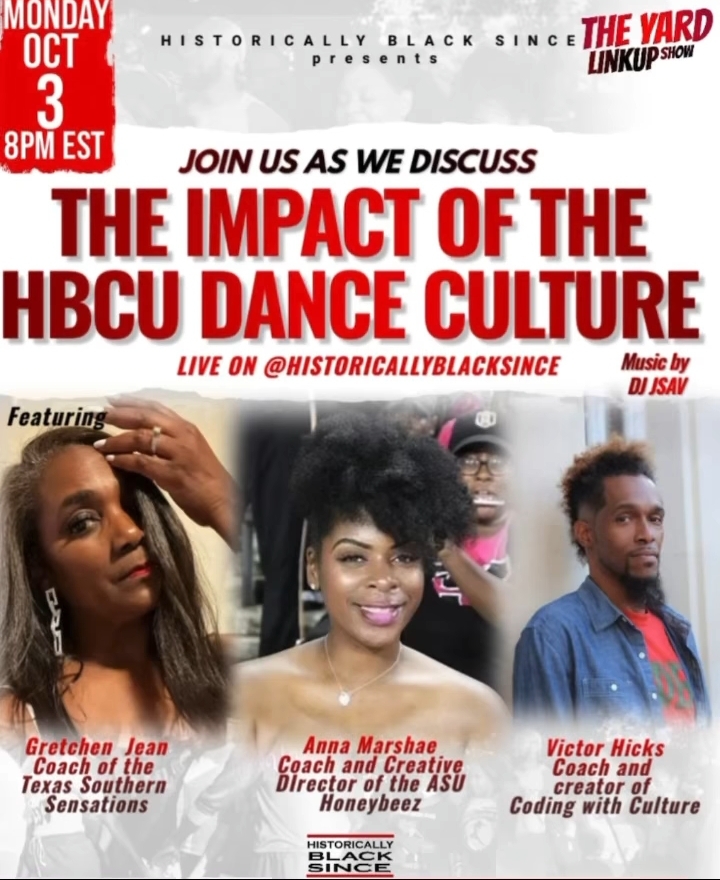 Dance culture is a paramount part of the HBCU culture that dates back to the early 1960s. With the HBCU majorette dance style being a trending topic lately, we recently had the chance to speak with a few coaches that specialize in HBCU Dance culture. Anna Marshae, Coordinator and Coach of Alabama State University’s “Honeybeez” Dance Team. Along with Coach Gretchen, who is Texas Southern University’s “Sensation” Dance Director and a former NBA Houston Rockets Dancer. Last but not least, we also had step coach and school teacher Coach Victor Hicks of “Coding with Culture”.

The topic for today, how the culture of HBCU dance styles have had a massive impact globally. From styles such as Contemporary, Modern, Hip-Hop, Tap, Jazz and more. One of our main focuses on this episode is the difference between auxiliary and dance groups in the HBCU dance culture. Whether it’s flag corps, majoretttes or dancers, there are distinct differences between all groups. Majorettes incorporate the use of batons and wider variety of dance styles, while Flag Corps utilize props, sabers and flags with sharp dance moves. While of course dancers integrate various dance styles but are different in their own way with their sharp, smooth yet energetic style.

For example, as stated by Coach Jean, Texas Southern University’s “Motion Of Ocean” is now the featured dance act. As this was not the case until the evolution of dancing when they first started in the early 1960s to now. In Houston, Texas Southern University was one of the favored schools to go to and band to march in at the time. When during performances such as they use to perform frequently in the Astro Dome, the use to be home of the Houston Astros Professional Baseball Team. Texas Southern’s dancers previously incorporated movements without certain coordination and techniques that are used today but were moreso creative to match the tunes played at that time. Since then, tunes have changed from breakdowns in routines, techniques in routines, creative formations, etc.

Another example, Anna Marshae says there is a huge difference between auxiliary and majorette groups; Flag corps, majoretttes, dancers. Whilst in the past there were no subgroups and that every group was labeled as “majorette”, that’s where the title “auxiliary” came from, due to the fact that they are different dance avenues. From Dance Corps to Stingettes and Honeybees. Another fact is Alabama State had majorettes but don’t anymore.

The dance groups at these institutions and the many HBCUs across the United States have had an enormous impact on society and the young women at these institutions today. Coach Hicks goes on to say, “Whilst teaching I’ve had white students that have stepped, Asian, Black, White, there’s always an educational peice no matter their race. While thankful for the exposure, I wonder if we truly appreciate the culture for what it was. I’m happy that the future is being amplified but there’s also a certain level of respect. You can’t let students or any for that matter attack the HBCU culture because a lot of things wouldn’t have been founded without the HBCU culture. They can’t benefit from it without repeating it first. Can’t have a dance TV show that disrespects the dance HBCU culture because without that culture you would have no platform the begin with. Children must be explicitly taught about their ancestors before they can comprehend what they’re doing.”

“The soul of HBCUS are programs like this that put the notion in the kids heads what black excellence truly is and there’s so many ways to express that. The Impact on the kids is amazing. That’s what makes HBCU Culture so valuable.”, says Coach Jean. Everyone agreeing to the fact that most HBCU students don’t have the same platform as most of the people who use our culture for social gain despite the fact we have put in just a much of the work. We put in so much work and don’t get the same recognition for a culture that is ours and that we have perfected just for others to monetize it. Showing that HBCU Dance Culture is truly a trendsetter but still must be preserved for the young women and men, especially our excellent Black and Brown students.